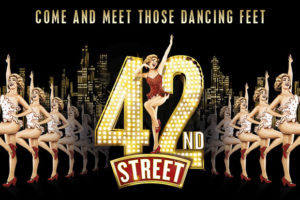 „Come along and listen to the lullaby of Broadway…“… „Come and meet, those dancing feet, on the avenue I’m taking you to 42nd street”…these and much more lyrics could not be truer, when we start talking of the new London production of Broadways biggest show: 42nd Street. You are welcomed into the evening by the sound of tap dancing and that is probably what you want to do on your way home: Dancing home with the beautiful sounds of Harry Warren sounding in your ears.

New York, beginning of the 1930s. Julian Marsh (Tom Lister), biggest name amongst musical directors in town, just lost his fortune during the Wall Street crash of 1929 and is in desperate need of a hit. Abner Dillon (Bruce Montague) is willing to finance Marsh’s show “Pretty Lady” as long as his `girlfriend` one-time star Dorothy Brock (Sheena Easton), who normally would be far too old and untalented in dancing, plays the lead. The chaos is perfect when two more persons are involved. Young dancer Peggy Sawyer (Clare Halse), who stumbles into the picture when she comes to the casting and misses to be cast by a heartbeat. In the end however, Peggy gets lucky and is cast. The other unlucky figure is Dorothy Brock’s former lover Pat Denning (Norman Bowman), who is still in love with Dorothy and wants to win her back from her financier Abner Dillon. When Marsh discovers they are still in love, he sends a couple of thugs after Denning out of fear Dillon might discover the affair and withdraw his money from the show. The show progresses and plays its first try-out in Philadelphia, where during the show Peggy and Brock crash into each other. Dorothy’s ankle is broken and Peggy fired by Marsh.

Because of Dorothy’s broken ankle, the show is about to close. That’s until the chorus girls suggest that Peggy might be able to play the role. Peggy, fired by Julian Marsh, is about to depart home to Allentown. The entire cast led by Marsh follows her to the station and coaxes her not to go and try it. Peggy is forced to learn the part in just two days until they open with the show in New York. Marsh pushes her so hard that she is about to break down before the show, when Dorothy Brock visits her. She, now happily married to Pat, offers Peggy some friendly advice and therefor helps the show to take place. When the show is about to start, Julian who by now is madly in love with young Peggy finds her, kisses her and tells her: „You’re going out there a youngster, but you’ve got to come back a star!“ With that in mind, Peggy plays the show of her life and makes it a huge success.

42nd Street is not the typical musical with a lot of theatrical scenes and a lot of dancing, singing gets a bit in the background in this production. This however, is not a problem at all because fantastic staged and choreographed scenes make up for the lack of singing. The sound through the entire show however is oriented to the sound of big Hollywood classics from the 30s. You are transported back in time as soon as the orchestra starts playing its cheerful jazz and big band like tunes.

With English TV star Tom Lister the directors of this production not only found a name to lead the cast but also a match in looks and voice for the role. With his booming voice Lister, who is best known for his portrayal of Carl King in Emmerdale, easily makes Julian Marsh appear as the strong-minded and notorious director that everyone on Broadway loves and fears at the same time. Lister charmingly plays the role, sings with an easy elegance that is also present in his acting. While you want to be on Peggy’s side when Marsh is harsh to her, you also can understand his motives that Lister plays out very wonderful. In addition, Lister very fine portraits the love Marsh starts to feel for Peggy and you just want to hold him, when she leaves him alone at the end of the play.

On Listers side as young Peggy Sawyer is Clare Halse. Very charmingly, she portrays Peggy’s progress from the shy and clumsy chorus girl to the celebrated star. From youngster to star couldn’t be truer for Peggy as well as for Halse. The second female lead Dorothy Brocks is played by international star and Grammy winner Sheena Easton. The actor and singer, who is well known for having sung a James Bond song (“For your eyes only”) is voice vice the star of the evening. Her songs “You’re Getting to Be a Habit with Me” and “Boulevard of Broken Dreams” build, apart from classics like “Lullaby of Broadway”, some of the highlights of what you get to hear during the evening.

Remarkable performances are also given by Bruce Montague, Norman Bowman and Graeme Henderson as Abner Dillon, Pat Denning and choreographer Andy Lee. Although all of them play comparably small roles they make the best of it and are brilliant in acting and especially Graeme Henderson in dancing as well.

The most laughs of the evening are probably counted for Jasna Ivir as writer Maggie Jones. Ivir, who previously appeared in Charlie and the Chocolate Factory, Chicago and Phantom of the Opera, gives a charming performance of the role. When you hear her in “Shadow Waltz” you’d wish she had more songs during the show.

The entire ensemble of 42nd Street gives a fantastic performance. First class dancing, colourful costumes and a remarkable set design let you escape to the America of the 30s for an evening. Maybe except for the longing for a course in tap dancing, an evening at 42nd Street will not let any wishes unfulfilled.